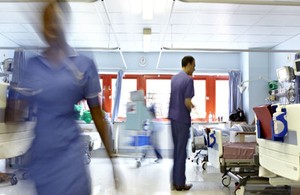 A Department of Health spokesperson said:

“The NHS is very busy but this year prepared for winter earlier than ever. Hospitals are coping well under increased pressure, and compared to January last year saw 111,000 more people in A&E within four hours. We are committed to delivering a safer seven day NHS which is why we have invested £10bn to fund the NHS's own plan to transform services in the future.”