A seven day NHS, and helping people live well with the dementia, will help make UK the most dementia friendly society in the world by 2020. 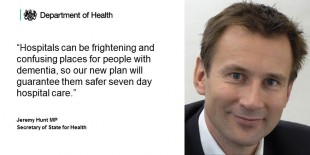 Health Secretary unveils plans to make the UK the most dementia friendly society in the world by 2020.

Boosting dementia diagnosis and helping people live well with the condition are key elements of Health Secretary Jeremy Hunt’s plans to make the UK the most dementia friendly society in the world by 2020.

The Government’s dementia plan published today sets out a series of commitments to boost diagnosis rates, raise awareness and encourage research, including:

Ofsted-style ratings for diagnosis and quality of care will be published by clinical commissioning group area this year;

Alzheimer’s Society research shows that 92% per cent of people think hospitals are frightening for the person with dementia.

The rollout of seven day services will particularly benefit dementia patients as it will help make sure they don’t stay in hospital longer than necessary.

Currently, consultant-delivered hospital ward rounds vary across the week and around the country but under new plans:

“A dementia diagnosis can bring fear and heartache, but I want Britain to be the best place in the world to live well with dementia.  Last Parliament we made massive strides on diagnosis rates and research – the global race is now on to find a cure for dementia and I want the UK to win it.

“This Parliament I want us to make big progress on the quality of care and treatment. Hospitals can be frightening and confusing places for people with dementia, so our new plan will guarantee them safer seven day hospital care, as well as tackling unacceptable variations in quality across England through transparent Ofsted style ratings.”

Today’s publications build on a series of national successes on dementia including raising diagnosis rates to their highest ever levels, doubling dementia research funding and getting over one million people to become dementia friends.

The Government has doubled research funding and invested £150m to develop a national Dementia Research Institute to drive forward new treatments and help fulfil our goal to find a cure by 2025. This will be supported by our new aim for 10 per cent of all people diagnosed with dementia to take part in research.

“We applaud the Government’s firm commitment to make the UK the most dementia friendly place in the world. Until recently, people with dementia were effectively cast out from society, but the tide is now turning. There are now nearly 1.5 million dementia friends helping to drive this change, and communities up and down the country are working to make streets, towns and cities more inclusive.

“But still many people with dementia face stigma and a health and care system that simply does not work for them - resulting in emergency hospital admissions, extended stays and desperate loneliness. We look forward to leading the continued transformation of society and investment in research so that, by 2020, people with dementia get the support they need every day of the year – whether that be at home, in residential care, hospital or in the wider community."

For the very first time leaders across the health, social care, local government and voluntary sector organisations have signed a joint declaration – committing to improving care and support to people with dementia following diagnosis.

“Dementia touches so many families but the quality of care people get after a diagnosis of dementia can vary across the country and this has to change. The Implementation Plan will tackle this head on and we will be working hard to make sure people with dementia, their families and carers get better support.”

“Since the first Prime Minister’s Dementia Challenge was launched we’ve seen real progress in the fight against this devastating condition, and the beginnings of a social movement to rally people behind that fight. There is still much work to do, and Alzheimer’s Research UK welcomes this plan which signals a strong commitment to build on the achievements of recent years. We look forward to working with the Government to deliver action on research and help accelerate the development of much-needed new treatments, preventions and improvements in diagnosis.”

“The UK is leading the way in the fight against dementia, and this blueprint once again shows real leadership from the UK Government in its efforts to tackle the condition. This plan lays out a clear direction for driving forward improved care, new treatments and greater awareness, and it will be important to link this strategy to international efforts if we are to have the greatest impact. We must push ahead with renewed urgency – the 850,000 people with dementia in the UK are counting on us.”

Key achievements on dementia so far are:

The Prime Minister published the first Dementia Challenge March 2012. It can be found here https://www.gov.uk/government/publications/prime-ministers-challenge-on-dementia

The Prime Ministers’ second Challenge on Dementia 2020 was published in February 2015 and is here https://www.gov.uk/government/publications/prime-ministers-challenge-on-dementia-2020

The joint declaration on post diagnostic care and support is published here https://www.gov.uk/government/publications/dementia-post-diagnostic-care-and-support