Today in an interview with the media, the Health Secretary Jeremy Hunt responded to the junior doctors’ strike by reiterating that his priority is “to do the right thing for patients”.

He rejected claims that the BMA had submitted cost-neutral proposals for a new junior doctors contract which could have resolved any outstanding issues. 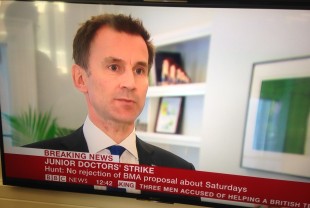 He explained that while there had been many areas of agreement the BMA had refused to negotiate on Saturday working and pay for unsocial hours. He also made clear the new contract will see the vast majority of doctors’ pay go up, not down. He added “I think it's a good deal; it's a fair deal”