"Zephyr is a bright, thoughtful and articulate student with a rich social life and a good group of friends. He is studying Psychology at Coventry University, a subject that is very close to his heart."

The article below, by Minister for Mental Health Alistair Burt, first appeared on the Huffington Post. 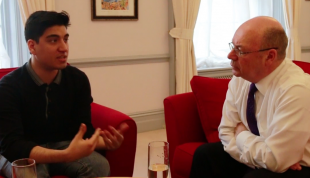 Zephyr is a bright, thoughtful and articulate student with a rich social life and a good group of friends. He is studying Psychology at Coventry University, a subject that is very close to his heart.

That's because for many years, Zephyr has struggled with mental ill health.

When Zephyr was six years old, his mother and father divorced. As a result, he felt very unsettled and that he didn't have anywhere he could really call home. He began to get into trouble at school and became very introverted, particularly during his teens, eventually sinking into depression. He certainly didn't want to tell anyone, or even admit to himself how he was feeling. Even now, Zephyr told me that while some of his male friends have changed their minds about speaking up, a large number still struggle to talk about their feelings.

Zephyr isn't alone in feeling this way. Here in England nearly two thirds of people are feeling worthless and alone because of their mental illness.

Men often find it particularly difficult to open up about their thoughts and feelings. 'Man up' and 'boys don't cry' are phrases that are all-too common in our culture.

It's this sort of language that can cause many men to hide those emotions from even those closest to them. That means many people end up facing their darkest hours alone, feeling unable to talk to anyone and crucially, unable to ask for the help they might need. The result can be deadly - suicide is the biggest killer of men under the age of 50. That means more men are dying by suicide than of cancer or car crashes.

It's #TimetoTalk day: I was lucky to meet @ZephyrJussa to talk about #mentalhealth- https://t.co/4H9AxMr77d pic.twitter.com/N5KYh3kpVY

It doesn't have to be daunting or difficult - a simple cup of tea and a chat could have an impact. The benefits of talking cannot be underestimated - 60% of people say they felt better after having a conversation with someone about their mental illness.

Zephyr is testimony to this. He reached a point where he knew he had to say something for the good of his health. After being admitted to The Priory, he found that there were a number of young people his own age - some boys, some girls - who were going through the same thing as him. While it was initially daunting to speak to others, it got easier and easier.

As a government, we are doing more than ever to support people with mental illness, investing an extra £600million over this Parliament and transforming services so people get better, faster care. But we can all play a role in making mental illness and talking about it, as acceptable as talking about a broken leg.

That's why we're asking everyone to have a conversation about mental health today: it's time to talk.