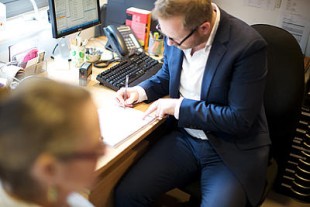 GPs will be able to compare their antibiotic prescribing with their colleagues throughout the country using a brand new tool, in a new bid to cut the numbers of antibiotics that are given out needlessly, Health Secretary Jeremy Hunt announced today as he called on GPs to only prescribe antibiotics when absolutely necessary.

This follows Chancellor George Osborne's stark reminder to the world this week that the overuse of antibiotics presents an 'even greater threat to mankind than cancer.' He warned that by 2050, this could cost the global economy up to £70 trillion.

Over the decades, people have been prescribed antibiotics too readily, and, as a result, the very bugs which they treat are starting to outsmart the drugs — meaning there might soon be no cure for some sexually transmitted infections through to life-threating illnesses like pneumonia or bacterial meningitis.

By giving healthcare staff access to data from all parts of the country, GPs will be able to see if they are above average prescribers and, if so, look at how they could reduce it.

This tool is designed to help GPs to peer review, analyse and learn from best practice. For example, we can see that NHS Camden CCG in London prescribes the fewest antibiotics with 18,585 items per 1000 residents, closely followed by NHS West London CCG, NHS Brent CCG and NHS Brighton and Hove CCG.

If a Clinical Commissioning Group has a particularly high level of prescribing this doesn't mean that GPs are always over-prescribing — the population could have unique circumstances which means its patients need more antibiotics than most. But it does mean that CCGs can now meaningfully analyse the data to see why they are prescribing the most and how this might be reduced.

Infections have become wise to our antibiotics — they are outsmarting the drugs and may soon leave us powerless to fight the simplest of bugs. If we don't take serious action now, illnesses that are relatively harmless today could become killers tomorrow.

We're giving GPs the power to see the latest data on how many antibiotics their peers are prescribing. I want to see antibiotics being prescribed only when necessary and hope this will be a new weapon to help GPs cut the numbers of antibiotics needlessly being given out.

The new 'Fingertips' tool, managed by Public Health England, gives GPs monthly data and means they will have up-to-date information on their own and their neighbours' prescribing habits.

It is the latest step in a series of measures to tackle over-prescribing in a bid to reduce antibiotic resistance. Other measures have included:

The Chief Medical Officer Professor Dame Sally Davies has called antibiotic resistance "the biggest threat” to the world's health, and the Prime Minister in 2015 stated it could lead to the "end of modern medicine as we know it”.

For too long we have taken antibiotics for granted and now we are facing the very real danger that they will become ineffective. This is the biggest threat to our health today, with over 25,000 people in Europe dying every year of infections that have become resistant to antibiotics.

GPs can now compare their prescribing patterns which will hopefully encourage people to think whether antibiotics are really needed and help save modern medicine as we know it.

Over the past five years, the Government has: